Ing. Milan Pour , Mayor of Milovice city received a visit by representatives of Czech – China Centrum z.s. together with the Chinese delegation headed by Mr. Chen Guorong, Director of the Department of Foreign Economic Relations of the Ministry of Commerce of Zhenjiang province, and Deputy Mayor of Yiwu City of Zhenjiang Province Mr. Shi Wenzhen.

The “Silk Road” project was introduced to the mayor of the city, connection of the People’s Republic of China and the Czech Republic by freight train and the project of establishing the “Czech station” of this train, which includes the construction of a logistics center. From the Czech – China Centrum z.s. it was recommended to the Chinese competent authorities selecting a suitable location the area of the former military area Boží dar in the cadastral area of Milovice. The mayor of the city presented the area personally including a tour attended by the Chinese delegation with representatives of the Czech – Chna Centrum z.s.

Ing. Milan Pour, the mayor of the city led a lively discussion with representatives of the Chinese delegation about  the possibility of exhibiting a logistics center and related facilities near the town of Milovice. He was interested in the impact on the life of the city’s citizens, the possibilities of improving the infrastructure and creating new working and business opportunities. In the end, he expressed his full support for this project as well as the development of Czech – Chinese economic cooperation. 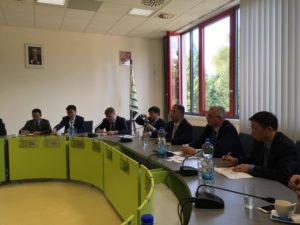